Over the past few years, many employees have resisted the notion of asking for a promotion at work. When so many people are looking for jobs, it might seem unnecessarily greedy to ask for a better job with more money; instead, it’s better to be grateful for the job you have, as dissatisfied as you may be with your current tasks.

But career experts note that employees who can prove their value to their employers actually have a good chance of earning a promotion, even when the economy isn’t stellar. In most cases, organizations don’t want to lose good employees that they’ve already invested time in and who already understand how the organization works. And with the cost of hiring a new employee around $3,500 plus salary and benefits, many companies realize that promoting a good employee is often less expensive than hiring a new one.

However, earning a promotion is not simply a matter of asking for it after working in the same job for a few years. You have to make your case for the change, demonstrating your value to the company and your suitability for the new position. To improve your chances, try these five techniques.

Most employees who get promoted do so because they have skills for the job they want; this means that being well-suited for the job you already have isn’t enough for you to be promoted. If you want to move up, you need to show that you’re prepared for new responsibilities. Attend workshops or seminars related to your industry, or take courses at a local university to earn a certificate or advanced degree. Keep in mind that simply gaining knowledge is not enough; you need to show your boss what you know and prove that you’ve strengthened your skills.

Nowhere is the adage “Dress for the job you want, not the one you have,” more true than when you want a promotion. Even if your office is a casual environment, present yourself as a competent profession by dressing nicely every day. When you show up to work in a wrinkled shirt or inappropriate attire, you send the message that you’re not ready to move up; in fact, your boss might think you’re not even competent to handle the job you have.

Looking like you’re a member of senior management isn’t enough — you need to act like it too. That doesn’t mean telling your colleagues what to do or using the executive washroom without permission. It means projecting an image of self-confidence and quietly commanding respect from your colleagues. Some career experts call this “acting like an owner.” Instead of passing the buck and claiming that something isn’t your problem, you look for solutions and take ownership of problems, while also staying above gossip and keeping your emotions in check. This type of behaviour gives your boss an idea of how you would behave in a position of more responsibility.

It may sound counterintuitive, but taking the vacation time that you’ve earned can actually help your chances of earning a promotion — if you handle it properly. Many times people avoid taking time off because they are behind on their work, or because they fear that the company will fall apart without them. But if you can go away for a few days and successfully delegate your work, you show your boss that you are a committed, competent employee. Taking a break also helps you recharge your batteries; while you’re lounging on the beach, you might just come up with an inspired idea for a client, or use your experiences with customer service if you need a last minute flight to spark a positive change in your organization, both of which can move you to the top of the list of promotable employees.

Toot Your Own Horn

Some employees end up frustrated when they aren’t promoted, but it’s partially their own fault. A busy executive managing a large staff may not be aware of every employee’s accomplishments, or it can take time for them to figure out who the stars on their team are. That’s why it’s important to communicate with higher-ups and tell them what you’ve done. Not everything you do is noteworthy — don’t expect praise for doing what’s expected — but when you experience success or something extraordinary happens, let your boss know via a quick e-mail. Over time, as your accomplishments increase, so will your chances of a better job.

On average, a promotion equals a salary increase of eight percent. Considering the average merit or cost of living increase is only around two percent, it’s worth your while to seek a better position within your current organization. While there’s no substitute for hard work and commitment, these tips can set you on the right path.

About the Author: Nicole Thaxton works in the career services department of a major university, helping alumni develop their career skills and find new jobs. She blogs about career development issues for the university website. 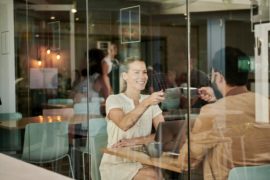